Are you drowning in that annoyingly long email chain with co-workers in the same office?  Enough is enough, break the incessant email chain today and be the office hero!

Take a look at your inbox.  How much communication is sent via email that would be better suited for face-to-face dialog?

The average employee receives approximately 121 emails each day.  Many of these emails are poorly crafted and do not adequately portray the correct information. 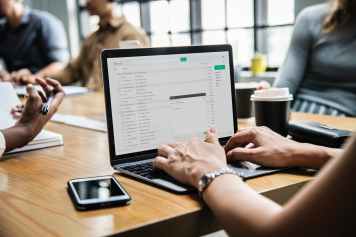 How many times have you sent an email that was perceived as confrontational or offensive but not intended as such?

Too often emails are the source of office grudges due to an unfortunate tone that was not intended but was received to be.  The reality is that a lot of office drama originates from emails that should have been face to face discussions.

The power of personal connections.

Humans are social creatures.  We were meant to communicate face to face which is why humans are so attuned to nonverbal communication.  The inflection in a person’s voice can show sympathy, anger, jovial sentiment, or a million other things that you can’t portray in digital format.  Additionally, you can pick up queues about someone’s mental condition when you speak with them.  For example, if someone is having a bad day and is short in a face to face conversation you will probably ask them if something is bothering them.  If you understand that they have a pipe leak at home, you will cut them some slack.  If you get a rude response in the email, you don’t understand the broader issue and would be prone to get upset yourself.

Often, emails are sent with incomplete thoughts or one-sided views.  Everyone in the email has to weigh in and provide insight before making a decision.  How long do you spend reading each email, managing a full inbox due to long email chains all to mutually decide on something that should have been accomplished in a 5-minute mini-meeting?  Think about that before you fire off an email to your cube mates.

My challenge to you!

Next time you hit the “new email” button, get out of your chair and have a personal connection and communicate in a more meaningful way.